There is an old saying – “People with weak stomachs should not watch sausage or legislation being made.”  A great application of that aphorism is seen in the current COBRA subsidy proposed legislation making its way through Congress.

The idea is simple – if people need continuing health care coverage (COBRA coverage) because they are involuntarily terminated from employment or have a reduction in hours of employment, they only have to pay 15% of the applicable premium through September 30, 2021.  Great.  But it is not so simple

An important issue is to identify the people who get the premium break.  In legal jargon, the subsidy is available to “assistance eligible individuals.”  Who are they?  It seems that, technically, the only people who get the break as the proposal is written are employees who are involuntarily terminated or have a reduction in hours, and not their spouses or other beneficiaries who might want to elect COBRA coverage.

This seems odd because the new proposal was ostensibly built off of a version of COBRA subsidies provided under the American Recovery and Reinvestment Act of 2009 (ARRA).  That legislation started out as a response to the financial crisis in 2008/2009 and provided a COBRA subsidy in the event of an involuntary termination of employment that occurred between September 1, 2008, and December 31, 2009.  The ARRA COBRA subsidy provisions were extended and expanded several times, eventually through May 31, 2010.  That law applied the subsidy to all qualified beneficiaries impacted by an involuntary termination; not just the terminated employees.  The IRS and DOL also issued hundreds of pages of guidance, FAQs, and notices interpreting, applying, and clarifying the legislative bowl of spaghetti known as ARRA.

Fast forward to today.  Below is a table showing the difference between the scope of “assistance eligible individuals” in the 2021 proposal and ARRA, as amended (which is just one of several key differences).  The highlighted language suggests that the new relief is limited to affected employees. 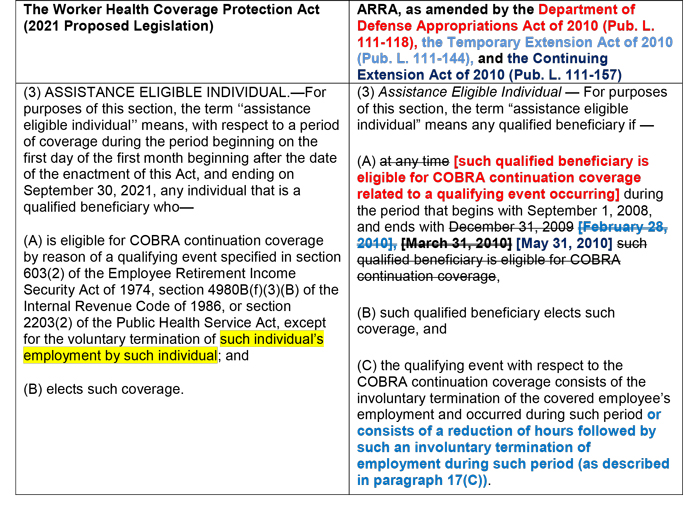 A summary of the proposal written by the staff of the Joint Committee on Taxation suggests that any affected qualified beneficiary could benefit from the subsidy just like under the ARRA wording.  Additionally, in a few places, the proposed legislation refers to “a qualified beneficiary” rather than an “assistance eligible individual” when describing the application of the COBRA subsidy.  For example, the proposal provides that commencement of COBRA coverage “elected by a qualified beneficiary” during the special election period generally starts on or after the first day of the first month after enactment of the proposed legislation.

If COBRA subsidies under the proposed legislation apply to all affected beneficiaries, why didn’t the drafters use the already existing definition of “assistance eligible individual”?  See the quote at the beginning of this blog entry.

This website uses third party cookies, over which we have no control. To deactivate the use of third party advertising cookies, you should alter the settings in your browser.